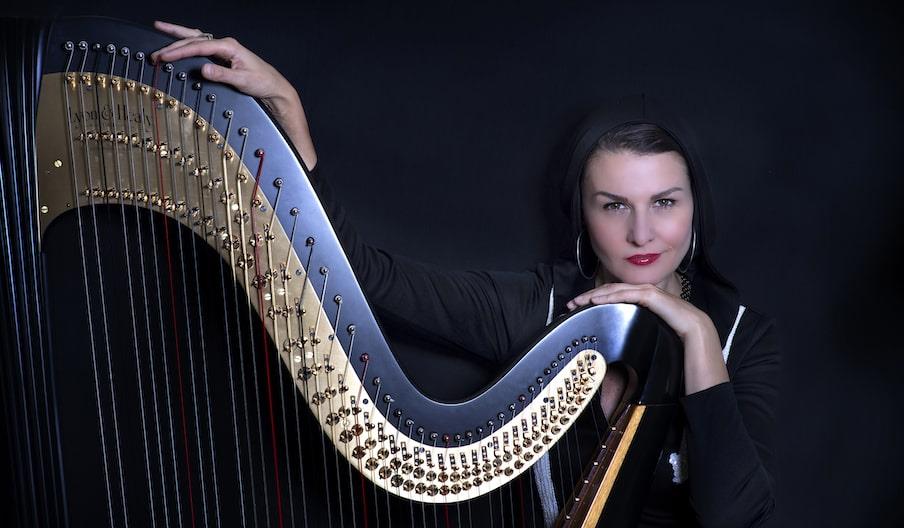 ALINA BZHEZHINSKA
"Bzhezhinska has a formidable technique, which includes conjuring an unusually wide range of timbral qualities . . . She is further equipped with something you cannot learn:  soul, which she has in spades,” wrote Chris May in All About Jazz.

An artist with a strong reputation for innovation, Alina's Hip Harp project creates a unique sound on the instrument using electronics and loop pedals, supported by a trio of top-notch musicians.

Through a combination of original works and covers, Alina pays homage to some of jazz, funk and Hip Hop’s greatest innovators, drawing on a variety of influences - from Dorothy Ashby’s ‘Afro-harping’, Alice Coltrane’s spiritual outputs, Duke Ellington, and Sun Ra’s free-form jazz experimentation, to 90s Triphop and Kuti-esque Afrobeat rhythms.

Three years ago Alina stormed the UK music scene when her quartet appeared at the Barbican during the EFG London Jazz Festival alongside Denys Baptiste and Pharoah Sanders - and the band were subsequently nominated for Best Live Experience of the Year at the 2018 Jazz FM Awards.

". . . Bzhezhinska shares with Alice [Coltrane] a mastery of the jazz harp.” - Will Hodgkinson, The Times

​SHIRLEY SMART
Jazzwise said this of Shirley Smart: ”. . . as a cellist-composer she morphs seamlessly from Stephane Grappelli-like swing and Bird-like bebop . . . a charming kaleidoscope and jazzy showcase of her global folk music-inspired compositions.”

Acknowledged as one of the UK’s most versatile and creative cellists, Shirley is equally at home and well versed in jazz, folk, Middle Eastern and World Music, as well as classical, and her music draws upon this rich tapestry of influences.

Originally trained under Raphael Wallfisch at the Guildhall School of Music, and Janos Starker in Paris, Shirley subsequently moved to Jerusalem, where she studied and performed.

During this period Shirley absorbed the rich and overlapping worlds of North African, Arabic, Turkish and Balkan music, as well as jazz, working with some of the region's leading artists, including Avishai Cohen, Omer Avital, Khaled Jubran, Sabreen and Yasmin Levy.

Since returning to the UK, Shirley has quickly garnered a formidable reputation with her own groups and projects, and has worked with many leading jazz and World Music artists, including Antonio Forcione, Mulato Astatke, Gilad Atzmon, Issie Barratt’s Interchange, Neil Cowley, Robert Mitchell and Alice Zawadzki.

Shirley's 2018 debut album, Long Story Short, received widespread critical acclaim, and she has since performed at festivals around the UK and Europe, including the London Jazz Festival.